The 51st annual Vinitaly trade fair, the world’s largest wine event (by at least some measures) and an unparalleled showcase for Italian wine, took place (as always) in Verona, Italy, April 9–12. Vinitaly is part spectacle, part family reunion, part madhouse, part study hall, and entirely worth the price of admission. 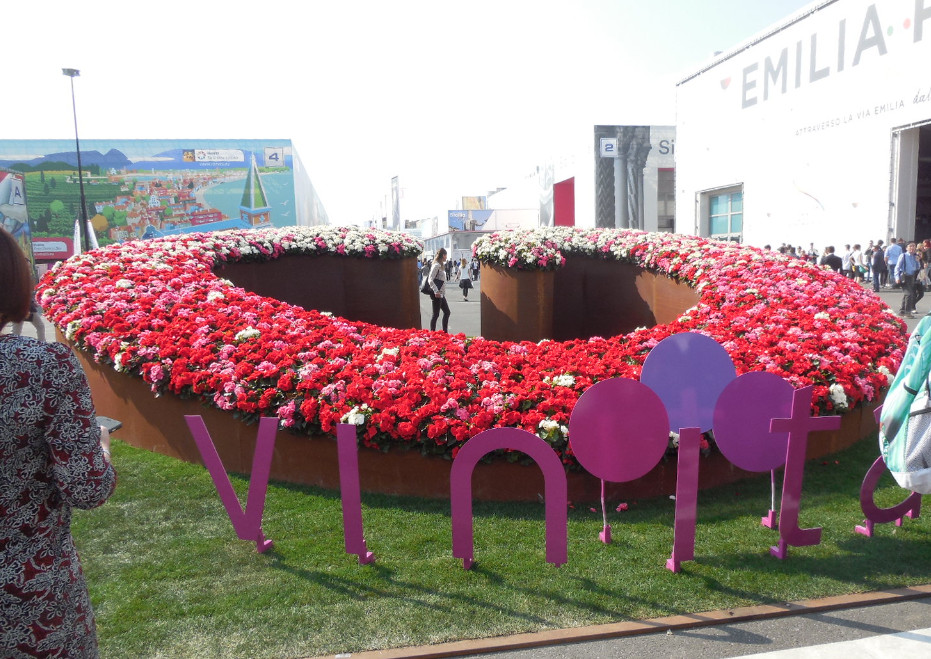 The scale of this event is mind-boggling for first timers. More than 4,000 exhibitors fill nearly two million square feet of exhibition space spread over more than a dozen airplane-hangar-size halls. The exhibitors are mostly Italian wineries showing off their current releases and making deals with the hordes of buyers and importers who are prowling the floor. But there is also a small contingent of wine producers from 30 or so other countries in the International Hall, as well as an assortment of service providers and an impressive array of equipment vendors with items ranging from corkscrews to harvesting machines.

Attending the fair this year were some 128,000 visitors, Vinitaly says. Could be. There was certainly a stadium’s worth of people on the opening day, Sunday. In past years, Sundays were like Disneyland on the most crowded summer day, only with free-flowing alcohol. But last year, Vinitaly established a policy of admitting only members of the wine trade to the grounds, which cut back drastically (if not entirely) on the groups who came for an all-you-can-drink Sunday afternoon party. (For them, there is now a robust schedule of events in the city of Verona with music, food, and lots of wine.) 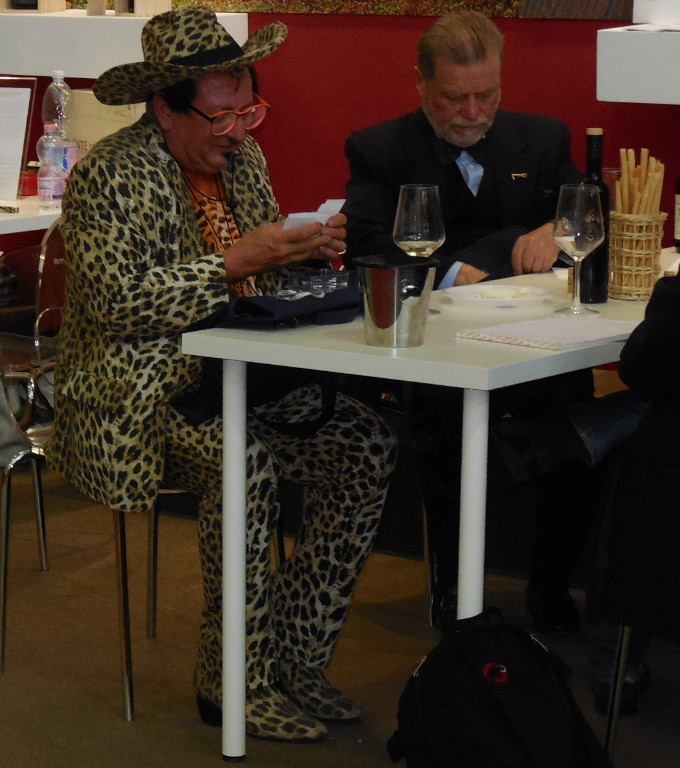 Sunday is still the busiest day, though, and the only day when most people really dress up. That’s when you’ll see Italian style on parade, with outfits ranging from trendy to classic to high fashion to the occasional nice-try-but-let’s-not-do-that-again. The entire fair used to be like that, but most attendees have come to the conclusion that tight, bespoke tailored suits and designer dresses with €200 high-heel shoes are not necessary to the business of doing business, so more comfortable clothes are standard by Monday.

Monday is usually a good day at Vinitaly. The crowds are a bit smaller, so you can have more success getting to the wines you really want to taste, and exhaustion hasn’t yet set in. By Tuesday, both attendees and vendors are starting to tire, but it’s quieter still and you can take things at a more leisurely pace. Wednesday, the last day, can be a great day or a big disappointment, depending on your goals. A lot of attendees leave town on Wednesday, but so do many of the winery principals. If you just wander and enjoy some unfamiliar wines, the day can be very interesting. But don’t be surprised if a majority of stands are boxing up their wines by midday on Wednesday.

Apart from tasting lots and lots of great wines, the fair can be a very educational experience. There are hundreds of classes, seminars, panels, and conferences, some of them in large auditoriums 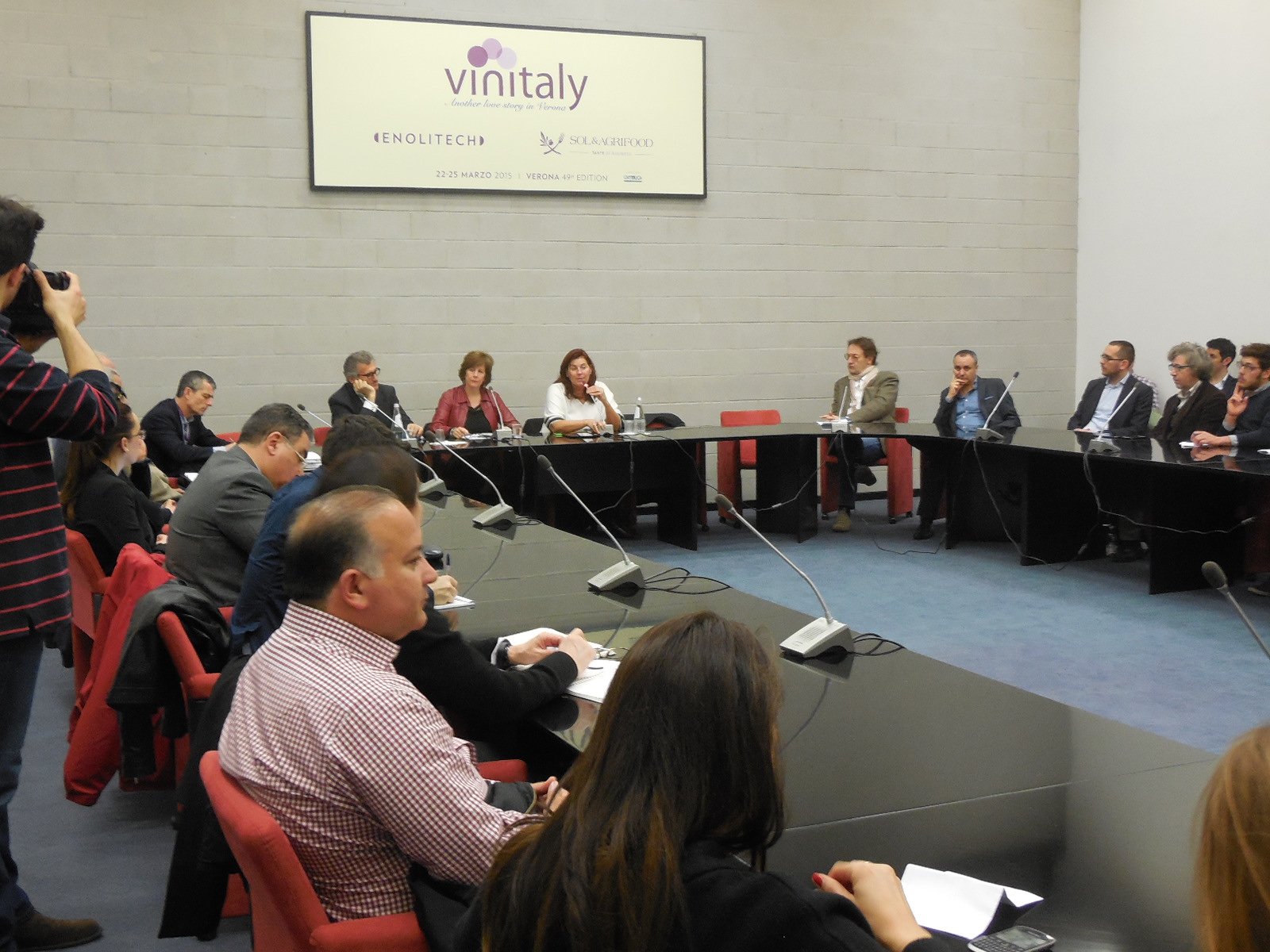 and some in small common areas among the winery stands. It’s hard to find out about many of them, because only the biggest ones are really well publicized (and they may be ticketed and full before you hear about them). But each region and some of the larger denominations have their own series of presentations that you will find out only about by drifting through their respective areas and seeing the signs (Sunday’s the time to do this). The large events often have simultaneous translation for non-Italian speakers, but many other presentations are in Italian only. If you don’t speak any Italian, going to a press conference or a technical panel discussion is probably not going to be worthwhile, but presentations with wine tastings can be interesting even without translation.

Among the many events at this year’s Vinitaly, there were three press conferences heralding the creation of new denominations in northeastern Italy. 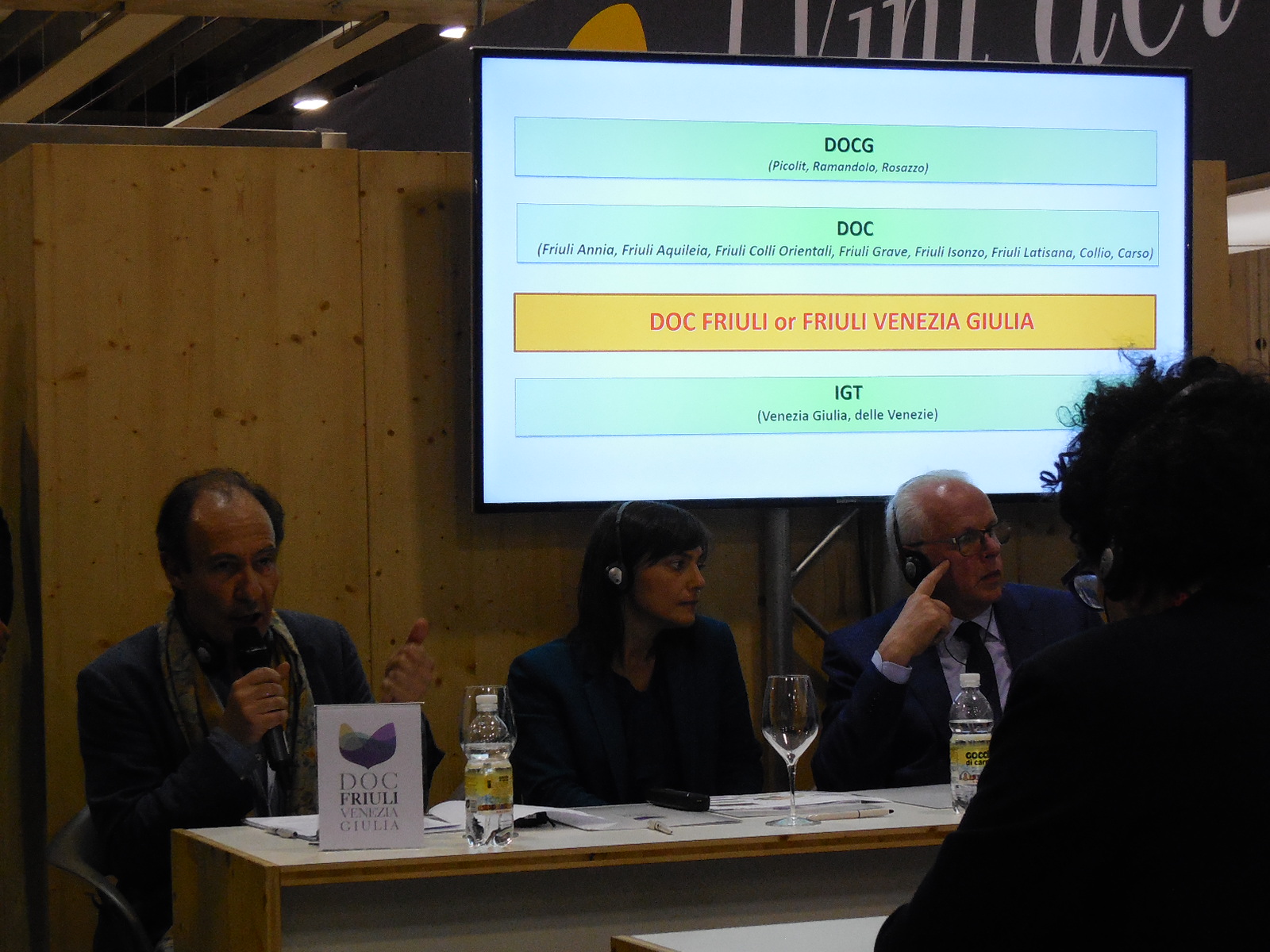 The one for Friuli DOC was the only one that could actually pour wines labeled with the denomination name, since it was given national approval for the 2016 harvest and is now on the market. Friuli (or Friuli Venezia Giulia) DOC is essentially a region-wide denomination (like Piemonte DOC or Sicilia DOC) that is intended to give a stronger branded image to wines that are currently struggling for recognition, while simultaneously adding cachet to the more specific denominations like Friuli Isonzo DOC or Friuli Aquileia DOC. Friuli DOC permits the production of white wines from Friulano, Verduzzo, and several international varieties; red wines from Refosco dal Peduncolo Rosso and again some international varieties; and sparkling wines from Pinot/Chardonnay blends or varietal Ribolla Gialla. Production is expected to reach 850,000 cases this year.

The third nascent denomination is the real heavy hitter of the group, as evidenced by the venue and participants at the press conference. Held in the Ministry of Agriculture’s exhibition area, this event was staged to present the new Delle Venezie DOC, which was granted national approval that very day by ministerial decree. 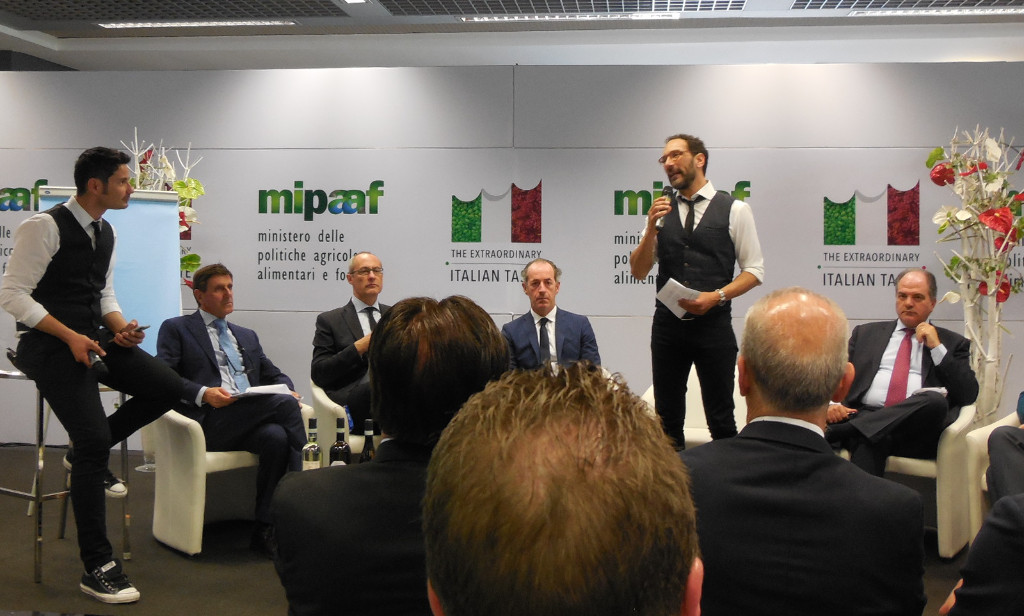 With numerous print, radio, internet, and television reporters in attendance, the event was hosted by Fede & Tinto, a pair of semi-comedians, semi-wine-educators, who for some reason host a lot of celebrity wine events. During the presentation, the presidents of Friuli–Venezia Giulia, Veneto, and Trento province congratulated one another on bringing into existence what may become the largest Italian denomination, pulling together under a single banner most of the 24,000 hectares of Pinot Grigio growing in the two-and-a-half regions. The headliner of the press conference was supposed to be the minister of agriculture himself, Maurizio Martina, but he ended up sending his undersecretary instead. (Martina was sort of like the Scarlet Pimpernel at Vinitaly, popping up here and there throughout the fair—but being conspicuously absent at places he was scheduled to appear, including this press conference and the much larger seminar in which he was supposed to explain the government’s latest plan for divvying out EU promotion funds to Italian wine producers.)

A scavenger hunt for rare wine-producing areas turned up at least one interesting story: a winery that was reviving a denomination that had been dormant for, they said, 30 years. The S. Anna di Isola Capo Rizzuto DOC in Calabria was one of a number of denominations that are inactive if not defunct, but Azienda Agricola Sant’Andrea decided to resurrect it with the 2016 harvest, producing both of its allowed wine styles—a rosato (a pleasant, quaffable wine that would be dynamite with a dish spiced with Calabrian chiles) and a red (not yet released) under the Marrelli brand. This denomination requires 40–60% of the Calabrian favorite Gaglioppo blended with one or more other grape varieties; the Marrelli rosato uses the maximum 60% Gaglioppo along with more or less equal parts of Nerello Mascalese (Etna’s primary red grape) and the white Greco Bianco. With total production at around 1,800 cases this year, it may be a while before there’s enough S. Anna di Isola Capo Rizzuto to export, but if you’re in the neighborhood (or at Vinitaly next year), you might check it out.